The tea fields of Tkibuli

The tea fields of Tkibuli

Only the top two leaves and the bud are nipped off a tea tree. These form the essence of highest-quality tea. Manual tea collecting is anything but simple: it requires precision and skill to ensure that only the most valuable plant parts end up in pickers’ bags. Eliso Tsirekidze skilfully runs her fingers across the small green bushes. Straight rows of carefully tended small trees grace the surroundings of her house.

Scarce is the number of plantations resembling the one sitting on the rolling hills of Tkibuli. It belongs to Eliso and her mother, and is a speck of green in the vastness of fallow land. The walls of the local lemonade factory are still soaked with the scent of tea, though production was brought to a halt a long time ago. This place once catered for the fame of this region, where several production plants were based. Today only half of the building is in use, and empty boxes are piled up against the walls. 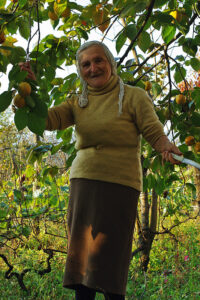 The former wealth of the Okriba region stemmed mainly from its coal industry. Only one factory is still in operation. Everything collapsed after the political system change. All that the miners left behind are abandoned housing estates.

During her first visit to Tkibuli, Katarzyna Zaremba of the Foundation for Sustainable Development (Polish: EkoRozwój Foundation, FER) learned that nobody had any development concept at hand. People still had their minds set on coal. However, chances for a relaunch of the coal industry were slim. Something else moved to the fore: the great potential for tourism of a region with appealing views and beautiful nature.

In 2012, thanks to support provided under the RITA Program, the Foundation held workshops aimed at identifying new perspectives. Together with workshop participants, they travelled across the region to find out what local entrepreneurs were up to. It turned out that Tkibuli was brimming with various interesting regional products. The list of possible development directions was expanded to include, among others, production of chestnut honey, which is characterised by a hint of bitterness and is produced from the chestnut trees growing on the hills surrounding Tkibuli. Handicraft from jet, a rare type of coal, would be another item worth adding to that list. 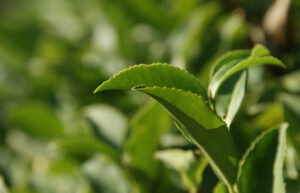 Tea was the region’s natural resource, but this path seemed full of difficulties. The tea fields had been destroyed and required costly revitalisation, and knowledge of the tea business had waned. Only some households and one small factory was still producing small amounts of dried tea leaves. Some farmers held limited, insufficient, qualifications – remnants of their work at state-owned farms (sovkhozes) where comprehensive know how remained the privilege of agronomists.

Making tea the local product of the region would have ended in failure, had it not been for Lela, Eliso’s sister and Tbilisi State University lecturer, for whom tea cultivation is the focus of both professional and scientific work. Eliso’s and Lela’s mother, an energetic 80-year-old, was the head agronomist in Tkibuli in times of Soviet rule. Their family-run, home-based plantation produced tea of good quality, and Eliso successfully managed a sideline home-made preserves business. The plan for 2013 was agreed in no time. They banked on tea, but decided to promote also other local products. The Tkibuli District Development Fund and the Biological Farming Elkana Association became the Georgian partners of the project.

They started with visiting various plantations together. Katarzyna Zaremba has one vivid memory of this project stage. “The group got out of the car parked next to a house on a hill. The view from the veranda was picturesque. Not so far away, perched on the slope of the hill, was a tiny tea field. The owner showed us a small bag full of dried leaves. Everyone examined the tea bushes, breathed in the smell, touched them, shared their comments, tried to determine the shrubs’ quality and age. It was difficult to pull them away from these plants,” she recalls. 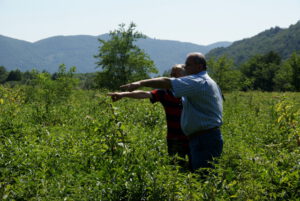 Gela Akhvlediani – the owner of a viable family tea business whose tea field was also visited – was hardly surprised. “Anyone who works with tea immediately falls head over heels in love with this plant. Tea is a bit like a small child,” he explained.

Project workshops were held in Tkibuli and at participants’ households. The goal was to ensure that everyone got to know each other well and got to see as much as possible. Participants were shown how to run a business and how to make relevant plans. The mix of Polish and Georgian specialist competence catered for successful workshop completion. Elkana trainers taught specific skills in a manner adjusted to local conditions. Polish trainers created space for cooperation. They kept to the rule: moderation is necessary, but ideas have to come from participants. It was crucial to adopt a visionary approach and plan ahead from many years.

Two organisations were established during the workshops: the New Okriba Association, which brings together manufacturers of various products, and a cooperative associating tea plantation owners. The first grant application was submitted, and allowed for purchasing equipment for packing dry tea leaves. Grubbing-up of neglected fields and development of tea-related tourism also made it to the to-do list.

Katarzyna Zaremba underlines that the goal was to make people understand that the role of other tea cultivators doesn’t have to be limited to that of competitor or rival. When more than one person has a tea field, then they cooperate to sell more tea together. Polish trainers drew from their experience in working with local entrepreneurs in Lower Silesia, Wrzosowa Kraina and Barycz Valley. In those regions they succeeded in creating a single local brand.

The Polish concept of organising local markets and fairs to promote products under a single brand was put into practice in Gelati. This fall, the area surrounding this old monastic complex housed the first joint “Tea Day” market. Women collected home-made food preserves and handicraft from their neighbours, a local artist painted the jar labels, and everything was sold out right away.

The “Tea Production as Entrepreneurial Leverage in Tkibuli District, Georgia” Project was executed by the Foundation for Sustainable Development in 2014 as part of the RITA – “Region in Transition” Program financed by the Polish-American Freedom Foundation.